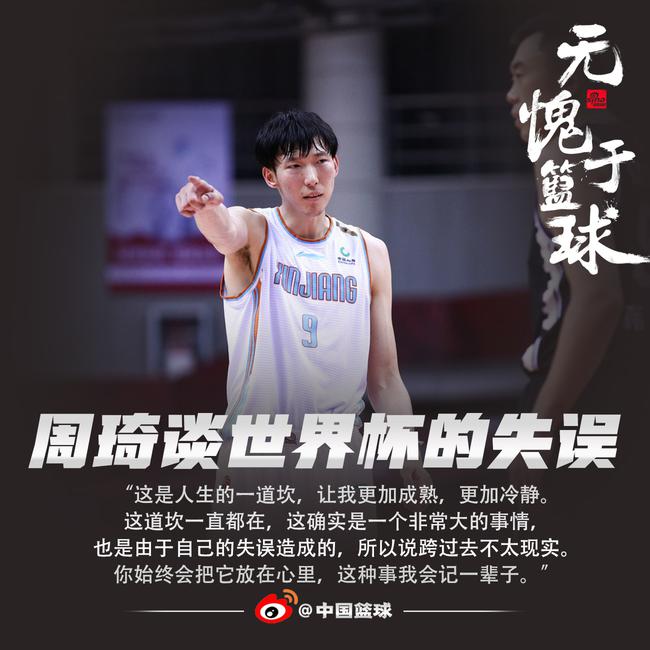 ——Interview with Zhou Qi, the "Big Devil" of Men's Basketball

"This is a hurdle in life, it makes me more mature and calmer."

After the World Cup, the "Big Devil" who was somewhat closed for a while, has now learned to accept and express frankly. Letting go sometimes does not mean forgetting, but starting anew, looking for a better self.

(Subheading) The death of the World Cup, a hurdle in life

Time back to September 2, 2019, Beijing Wukesong Stadium. In the last 7.2 seconds, the Chinese team, which leads by 1 point and holds the ball, is undoubtedly closer to victory. If they can win, the host will take the initiative in the group qualifying and even the Olympic ticket competition.

Fate made a joke. What happened later, people don’t want to remember, but it’s hard to forget.

Zhou Qi made a sideline ball error and was cut off by a Polish player. Zhao Rui, who returned to the defense, fouled. The Chinese team was dragged into overtime by the opponent and was defeated. After losing to Venezuela, they missed the round of 16. After losing the qualifying match with the Nigerian team, the Chinese team failed to pass through Tokyo.

Some people blame Zhou Qi for the failure of the Chinese men's basketball team to pass through the Olympics, and there are endless sarcasm and even abuse of him on the Internet. After the World Cup, Zhou Qi was alone for a long time, not speaking, hoping to be quiet. He wants to spend time to adjust his mental state through training and preparing for the next league season. His family and coach have given him a lot of encouragement. "I will definitely look forward and perform better by improving my abilities. I will not make such mistakes again in the next games."

"You will always keep it in your heart. I will remember this for a lifetime." Zhou Qi hopes that through constant hard training and competition, he will become stronger, help the team more comprehensively, and maximize his ability. .

Speaking of the psychological state during that period, Zhou Qi thought for a long time. "I feel a lot of pressure. The whole person is in a state of closed self. I don’t want to communicate with others or talk about those things. I still hope that I can be alone for a period of time, calm down to accept, and change myself, because things are also happened."

Regarding the unfriendly voices on social media, Zhou Qi said: “There will be some (careful) that you can’t be completely ignorant of it. This thing is always there. You can’t change everyone’s mind, you can only do well. Yourself. You cannot change this thing. It is impossible to say that this situation can adapt to you, you have to adapt to it."

(subtitle) does not meet the CBA semi-finals, the goal is to be the champion

After the mission of the national team, Zhou Qi returned to the club to prepare for the 2019-2020 season CBA league. This is his first season of returning to the CBA arena. He is greeted by his first-time head coach Ah Tejiang, as well as new teammates such as Qi Lin, Lu Tubula, Revkatijiang and Liu Lipeng.

In Zhou Qi’s view, Ah Tijiang’s coaching ability is beyond doubt. He had encountered some difficulties before. After returning to the club, he received a lot of help from Ah Tijiang’s guidance in training games and life after a season.

"His military style requires me to learn. Through contact and communication with him, my thinking or understanding ability has become broader, not so stubborn, and thinking more openly." Zhou Qi said, "I encountered difficulties. After that, to a certain extent, the guidance of Ah Tie Jiang was very important to me, so that I could get out of that state as soon as possible."

Zhou Qi believes that he is becoming more and more adaptable to Ah Tijiang’s tactical system. “A Ti Jiang has also taken Wang Zhizhi with him before, and his use of me can be said to give full play to my characteristics, avoiding my disadvantages, and tactical arrangements around I set up some special styles of play, which is a certainty to me."

Affected by the epidemic, the CBA was once suspended this season, and it was rematched on June 20. The entire season lasted for nine and a half months, which is an unprecedented experience for anyone.

"After determining the time (for the rematch), I feel like a rock has fallen in my heart." Zhou Qi felt that after all, the preparation before the match is different from the training months before the match. It is too late to determine the time for the rematch and it is more difficult for players to adjust. , So I feel a bit "torn".

The Xinjiang team encountered a lot of resistance this season. The striker Abdul Saramu was seriously injured and was reimbursed for the season. Under the influence of the epidemic, the foreign aid was unable to return. The signed "wild ball" foreign aid Grover was abandoned within a few games. After the semifinals, the Xinjiang team, which played for most of the Chinese class, ranked second in the regular season, and was eliminated by the Liaoning team in the semifinals.

Zhou Qi said that when the team encountered some problems, the overall performance was not satisfactory. Injuries occurred in the team after the rematch, which disrupted the plan to a certain extent, encountered various problems, and the final results were not so satisfactory. "In the end, we are definitely not satisfied with this result, because our goal is not the semifinals, we have always been fighting for the championship."

(subtitle) I care more about team performance than MVP

This season, Zhou Qi showed his "big devil" qualities. He averaged 22.2 points and 13.3 rebounds per game during the regular season, setting a career high. In addition, he also had 2.3 blocks in the account, which brought him infinitely close to the first regular season MVP of his career. He is behind Yi Jianlian by 1 point.

"From the first year of entering the league, I have not used data to prove anything, but used my ability to help the team achieve good results as much as possible. This is more important than personal data."

Unfortunately, Zhou Qi, who missed the MVP, still won the Best Defensive Player award. "Before I went to the United States, the task I assumed in the team was to be more defensive. I have been doing my job well and increasing offense while doing a good job of defense. I still expected myself to be more comprehensive, not Do a certain item."

Zhou Qi feels that after returning from playing abroad, he is more capable of confrontation and judgment than before. At the beginning of the league, he is looking for the state of the game, and slowly adapting to new teammates, new coaches and overall play style. Better.

Nowadays, there are many young players in this Xinjiang team. Except for Xirelijiang and Kelanbeike, Zhou Qi is considered to be the player with the longest time in the team, which makes his shoulders more responsibilities than before.

"Normally, I'm a young player." Zhou Qi, 24, does not forget to emphasize this point. He hopes to take on more through the game and help the team to the best of his ability. The Xinjiang team began to prepare for the third day of the Lunar New Year. During the closed training period, Zhou Qi had more opportunities to communicate with his teammates.

"After the young players came up, I played with them for the first time and trained together. Everyone needs a process of mutual understanding, including adapting to each other's playing methods and understanding each other's understanding of basketball." In Zhou Qi's view, no matter the degree of tacit understanding or the feeling of the game. , The team's integrity after the rematch is better than before. "The team has a lot of talented players, and they are constantly improving, taking on more responsibilities for the team and sharing the pressure of our relatively ‘old players’."

Zhou Qi remembers the excitement and excitement when he first joined the CBA in the 2014-2015 season. He was surrounded by experienced teammates such as Liu Wei, Su Wei, and Tang Zhengdong. He also felt the pressure invisibly. "The body is relatively thin, and there may be confrontation with them. Some gaps, more still holding a learning attitude, is the first time to enter the league, and joining such a strong team, the pressure is still quite large."

In the past six years, Zhou Qi has grown from a star of hope to a star player. He has had high points and lows. Recalling this experience, he said that he hoped that he would continue to work hard, continue to persevere, and not be affected by these factors. "It's better to meet these things earlier than later. From the moment I entered CBA, even if I enter society, this is something I must experience, and it is something I should grow up to."

Chinese basketball has produced many excellent inside players, including the three former "Mobile Great Walls", and Yi Jianlian, who is still the leader. As a leader of the new generation of inside players, Zhou Qi said that he will use these predecessors as examples, work hard towards the goal, and constantly improve himself, without restricting himself to a certain aspect, hoping to become more mature and assume more responsibilities.

"At present, I still have no way to compare with them. I still need to improve in all aspects. Excluding the two years I went to the United States, this is my fourth (CBA) season. I can only say that I have just started to go down smoothly after starting The whole state of the first three years is completely different from that of the fourth year. Maybe I sometimes forget those three years. After returning from the United States, it is my first year to play league games, so that I can have a better state. Play a game."

Faced with the speeding trend of basketball in the world today, as an inside player with flexible footwork and excellent mobility, Zhou Qi believes that the current basketball trend allows him to avoid some of his own disadvantages and use his personal abilities.